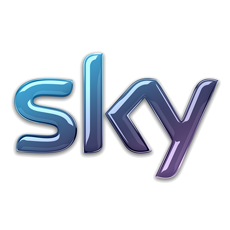 Sky is the brand name for BSkyB’s digital satellite television and radio service, transmitted from the Astra satellites located at 28.2° east (Astra 1N/2A/2B/2C/2D) and Eutelsat’s Eutelsat 28A satellite at 28.5°E.

Sky’s digital service was officially launched on 1 October 1998 under the name Sky Digital, although small-scale tests were carried out before then. For the first time, BSkyB used the newly-launched Astra 2A satellite, which has since come to broadcast exclusively to the United Kingdom and Ireland. At this time the use of the Sky brand made an important distinction between the new service and Sky’s analogue services. Key selling points were the improvement in picture and sound quality, increased number of channels and an interactive service branded Open…. now called Sky Active, Sky competed with the ONdigital (later ITV Digital) terrestrial offering.

New Astra satellites joined the position in 2000 and 2001, and the number of channels available to customers increased accordingly. This trend continued with the launch of Eurobird 1 (now Eutelsat 28A) in 2001.

Originally Sky launched with a set top box known as the Sky digibox, however, in more recent years the Sky+ and Sky+ HD boxes have launched alongside the original box. Sky+ is a digital video recorder with an internal hard drive which allows viewers to ‘pause live television’ (by switching from a live feed to a paused real-time recording that can be restarted at any point) and schedule programs to record in the future. Sky launched HDTV services in May 2006. The first photos of a prototype Sky HD receiver began appearing in magazines in August 2005. All Sky+ HD receivers incorporate a version of Sky+ using either a 300GB or 500GB hard drive (of which 160GB or 250GB is available to the user) to accommodate the necessary extra data.

Slogans Sky have used for marketing include « What do you want to watch? », « Entertainment your way » and the current slogan « Believe in Better ».[1]

In early 2012, Sky released an update to its Sky Anytime service. This update offers customers the chance to buy and rent films from the Sky Store. In June 2012, Sky launched a new EPG for Sky+ HD boxes. The update boasts a new modernised look and improved functionality. As of October 1, 2012, Sky Anytime was rebranded as On Demand which would then include ITV player and 5 Demand. BBC iPlayer will follow in late Autumn with 4oD to be included in early 2013.

Sky’s standard definition broadcasts are in DVB-compliant MPEG-2, with the Sky Movies and Sky Box Office channels including optional Dolby Digital soundtracks for recent films, although these are only accessible with a Sky+ box. Sky+ HD material is broadcast using MPEG-4 and most of the HD material uses the DVB-S2 standard. Interactive services and 7-day EPG use the proprietary OpenTV system, with set-top boxes including modems for a return path. Sky News, amongst other channels, provides a pseudo-video on demand interactive service by broadcasting looping video streams.

Provided a universal Ku band LNB (9.75/10.600 GHz) is fitted at the end of the dish and pointed at the correct satellite constellation, most digital receivers will receive the free to air channels. Some broadcasts are free-to-air and unencrypted, some are encrypted but do not require a monthly subscription (known as free-to-view), some are encrypted and require a monthly subscription, and some are pay-per-view services. To view the encrypted content a VideoGuard UK equipped receiver (all of which are dedicated to the Sky service, and cannot be used to decrypt other services) needs to be used. Unofficial CAMs are now available to view the service, although use of them breaks the user’s contract with Sky and invalidates the user’s rights to use the card.

BSkyB has no veto over the presence of channels on their EPG, with open access being an enforced part of their operating licence from Ofcom. Any channel which can get carriage on a suitable beam of a satellite at 28° East is entitled to access to Sky’s EPG for a fee, ranging from £15-100,000. Third-party channels which opt for encryption receive discounts ranging from reduced price to free EPG entries, free carriage on a Sky leased transponder, or actual payment for being carried. However, even in this case, Sky does not carry any control over the channel’s content or carriage issues such as picture quality. Recent years have seen the launch of numerous low-budget channels, including foreign and shopping channels, often with very poor technical quality.

Sky recently stopped taking channel launch applications for its Electronic Programme Guide (EPG). Ofcom has said that this will give existing channels an unfair advantage and may force Sky to replace older set-top boxes for customers with the newer ones.

Due to either limited regional availability of certain channels, or conditions relating to their must-carry status, Sky operate four regional variations of their EPG for domestic customers. The four different EPGs transmitted are: Republic of Ireland, Northern Ireland, Wales and England/Scotland. The Northern Ireland EPG has the most listed channels, with the Republic of Ireland having the least, the difference is major as the ITV channels, Five and BBC Radio are missing. Much of the missing content for Irish viewers is available through ‘Other Channels’ but Sky+ viewers cannot record from ‘Other Channels’. These missing channels are a bone of contention for Irish viewers, who are often forced to seek out grey market UK Sky cards if they want the missing channels. Customers in Ireland pay 20% more and get an inferior service,[3] although Irish customers do not have to pay the UK TV licence fee. Each viewing card or smartcard provided by Sky is programmed with the customer’s postcode, so when inserted into the user’s set-top box it selects which EPG is used, as well as determining which regional variation is allotted to the BBC One, BBC Two and ITV channels for users of the England/Scotland EPG. All regional variations of BBC One and BBC Two are available to all UK viewers on channels 971-992.